When a vulnerability in your organization is discovered by multiple tools, each tool reports that vulnerability differently. Information such as the metadata and remediation instructions might vary from one tool to another. This can make managing vulnerabilities difficult — even though you're dealing with the same problem, you have several tools providing different information that might or might not be useful for your environment. You might also have a tool that reports several distinctly different findings for what is essentially the same vulnerability. With Resolve you can correlate these findings to point to the same master finding.

For example, you might use two tools to run scans on a set of web servers. Each tool has found multiple findings of the same type of SQL injection attack. These findings might be associated with different master findings in Resolve, one for each tool. Rather than maintain separate definitions, you can correlate all of these findings to one of the master findings to use going forward. Once this correlation is made, all other findings of the same type of SQL injection attack are automatically correlated for you. If needed, you can modify the details in the correlated master finding to contain the most useful information relevant to your security needs.

Take the example of unlocked doors as described in The vulnerability data model. A vulnerability (unlocked door) is reported several times on the same asset (your house) but is presented in Resolve as a single finding: 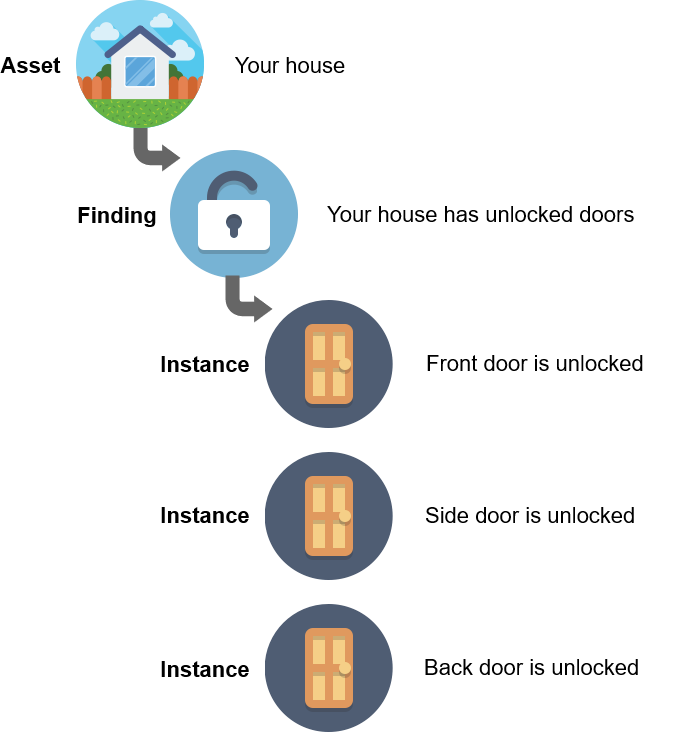 Resolve can remove or consolidate duplicate results in a few ways. One is vulnerability compression, which groups and tracks a vulnerability appearing multiple times on the same asset as a single finding. Resolve can also identify if one or more correlated instances are actually the same instance by comparing instance properties and fields. If this happens, duplicate instances are automatically marked and grouped under a parent instance.

Asset enrichment is automatic based on asset correlation. When a new finding is added, Resolve determines if the finding asset already exists in the database based on the network topology and matching asset properties.